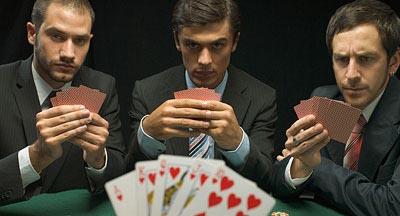 There are many ways of winning at a poker table and the most rewarding victories are the ones when you take down a pot without having the better hand. This is usually the result of paying attention to the game and making a string of moves that your opponents would interpret as a sign of strength. Sometimes you catch a lucky break and take advantage of a dangerous board to frighten your opponents, but in most cases this is the result of perfect planning.

It begins as early as pre-flop but in order to remain a mystery for your opponents, you first need to learn what they are about. Reading a player is much difficult online because you do not see the opponent, hence you need to base your decisions on his batting patterns, his attitude at the poker table and even some less obvious facts such as his name. The better you are at interpreting online tells, the easier it will be to win pots and your bluffs will be more successful, as long as you do not overdo them. This is a never-ending learning process and only by playing a lot of hands, one can hone his skills of reading other players at a virtual poker table.

The first indicator is the nickname the player assumes when playing online, but the general rules is that the players are the exact opposite of what their names try to suggest. Players who advertise themselves as rocks, bluffers, or maniacs are rarely what they say they are, so you shouldn’t fall into their trap. A more relevant tell is the way a player acts when not playing, what he says in the online chat and which is his attitude towards other players. Those who use foul language and start insulting their peers after they lose a hand, are usually beginners or frustrated players who are en route to losing their money.

A good poker player will refrain from talking too much in the chat and won’t try to teach others, even when he has some powerful and astute observations to make. Many rookies are simply overstating their satisfaction of playing online and their lack of knowledge is so obvious that it is worth making notes about them to keep them in sight. Those who play the sheriff and try to stay in the spotlights all the time, by cracking jokes about losing players or threaten those who try to steal the blinds are usually weak players. There is a lot of diversity in this online environment and if you are to be the top dog, you need to understand how the lesser creatures think and act. After learning how the opponents you consider to be weaker than you learn and act, you may be only one step ahead for some big earnings. However, you should focus more on the cards you are holding than on how weak your opponents are.

There are more advices for you with the list of articles below: