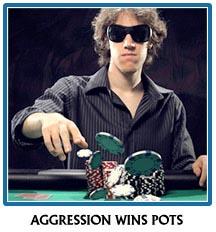 Playing aggressive poker is the best thing a player can do, regardless of stakes and type of game, but this kind of attitude is particularly lucrative when playing heads-up sit’n goes. Unless you take initiative and dominate the table, the opponent will get the chance to push you around and eventually build his stack at your expense. One of the things that makes this kind of game more challenging, is that players have less time to adjust to their opponents strategy and need to come out firing on all cylinders.

In regular tournaments, players can take their time to learn as much as possible by reading their opponents and studying their tells, a luxury that they can't afford when playing heads-up. The distinction needs to be made between a heads-up sit’n go and regular cash games, with the latter being suitable only for veteran players. Rookies should avoid these confrontations, because the odds of running into a vastly superior foe are considerable and in these games the better player wins in an overwhelming majority of cases.

Regardless of your skill level, the ability of playing in heads-up sit and goes can be honed by reading informative websites at the same time you play. Big hands might win you large pots, but until you are being dealt such cards you would probably have a short stack in front of you, which means that doubling up loses its significance. The moment you sit down at the heads-up table, you need to forget entirely about the range of hands used for playing in tournaments and consider new options.

Any pair should be plagued aggressively from the button, and suited connectors shouldn't be folded either. The only way to enter pots when playing heads up is with a raise and don't hesitate to reraise your opponent when you sense that he's trying to steal your big blind. The same strategy should be employed in regular tournaments and even in cash games, but when it's just two players locking horns, this kind of attitude is essential. Hands are being played at a much foster pace, and although the difference between the small and large blind might not seem considerable, the losses compile over time.

Not having a clear strategy for the flop and turn can render all the progress made free flop useless, and a perfect balance needs to be found between slow-playing good hands and protecting average ones. One thing that players need to remember is that hands that are regarded as mediocre at the full table and are unplayable even when playing shorthanded, are suitable for heads-up play. If there is a time to bluff lavishly, then this is when you play heads-up, both sit’n goes and cash games. Bluffing is very important and if you think that your opponent has got a weak pair in his hands, always try and make a bluff, it may bring you satisfaction.

Keep on getting acquainted with the best online poker strategies: