A scientific approach to poker 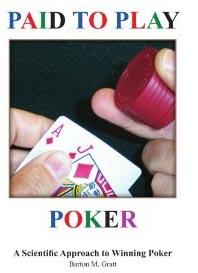 Anyone has the right to say that poker is a game of luck and it is not a lie if they believe it, but those who have this kind of approach towards poker are bound to fail miserably. The reason is that by relying exclusively on chance, they fail to develop a coherent strategy and don't even bother to observe the way a player behaves at the poker table. It is not only hiding tells and keeping the straight poker face that matters, but also being capable of interpreting the opponent’s betting patterns.

No limit hold‘em and other variants of poker are dominated by the same players, which proves beyond any doubt that skill and experience are what makes the difference. The information available online supports this theory and those who conduct research between poker sessions will forever change their perception about this game. While accepting the fact that chance can sometimes render even the best played hands and intelligent strategies useless, on the long run it plays a minimal role.

If a player doesn't know exactly what's his chance of hitting a flush or straight draw, he is more likely to bet the wrong amount or call when he would better fold his hand. The gutshot draw for instance is less likely to turn into a winner than an open ended straight draw, therefore the amounts worth calling to see another card differ from case to case. Savvy players can immediately calculate the odds for each player to win if they see all the cars, but the trick is to make the right assumptions while you are at the table.

Since you won't get the chance to see what cards your opponent is holding, you need to put him on a range of cards depending on his actions pre-flop and on the subsequent streets. Such an assumption is not merely guessing, because the one making it takes into consideration facts that transcend the current hand. By keeping track of how player response to bets and raises pre-flop and how he chooses to play position, one can estimate the strength of his hand.

No limit hold’em is not exact science, but it relies heavily on mathematics to calculate the implied pot odds as much as it relies on psychology. A fully fledged players knows how to put his opponent on the correct range of cards, while concealing his own hand. The difficulty increases as the stakes go higher, and that's why beginners are recommended not to leapfrog any limits in an attempt to maximize their winnings. The more hands one plays, the more experience he accumulates and the less likely it is for him to be tricked by equally capable opponents. After you have been playing a considerable number of hands, you will realize that the game of poker is a game of skill judge and has almost nothing to do with luck. However, there are a few chances when luck is involved, in case of a bad beat for example.

For more valuable strategies to play online poker check out the following articles: