Improve your game on Turn and River 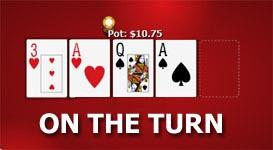 The best thing you can do to improve your game on the final two streets in no limit hold’em, is to play your hand in such a manner that your opponent will wait for an excuse to fold his hand. This sounds easier than it is, but professional poker players know exactly how to push their opponents into a corner and prevent them from becoming dangerous. In order to dominate the turn and eventually the river, you need to focus on the early stages of a hand, namely the pre-flop and flop.

Playing your opponent instead of your cards is a necessary skill to turn from a rookie into a pro, but everything begins with the two cars that you are dealt. When you make a move pre-flop you need to be aware of your position at the poker table and your image, so that you can accurately predict the way the hand can evolve. If you are holding a hand worth protecting, you should make a bet that is large enough to act as a deterrent to those who would otherwise be tempted to draw.

On the flop you can take advantage of your late position and raise your opponent if he makes a move and the flop is not dangerous. It is even more important not to resort to a simple call or check if cards of the same color appear on the board, because better players conceal their draws with a block-bet. In case you are the first to speak, a continuation bet is mandatory because you need to showcase confidence and represent a strong hand.

In the unlikely case that your opponent keeps calling, while hoping to make flush on the turn, the suit of the next card will clarify things for you. A bet on the turn is a clear signal to throw your cards away even at lower stakes, and only newbies will make another call to see what the river will bring. By betting on the previous streets, you can easily determine whether the one calling made his flush, straight or hit a set.

If you find yourself at the opposite end of the draw, and you are the one waiting for a card of the right color, don't make the mistake of the re-raising on turn or river if you fail to make the hand. Many beginners regards the bluff as a solution of last resort, which is a huge mistake and they frequently end up paying the price. The only case when it is reasonable to represent a flush on the late streets is when your opponent has reasons to put you on two over cards of the same color. The trick is to win use this idea as early as possible, so that it will look like you drew the card you needed and moved in for the kill. After playing thousands of poker hands, you will definitely improve your style and you may get some cash as well.

You will be able to stack up on cash thanks to these online poker strategies: